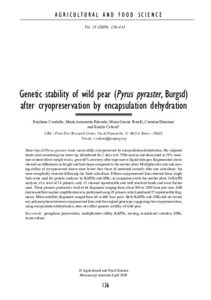 Shoot tips of Pyrus pyraster were successfully cryopreserved by encapsulation-dehydration. Na--alginate beads each containing one shoot tip, dehydrated for 2 days in 0.75M sucrose and desiccated to 20% moisture content (fresh weight basis), gave 60% recovery after exposure to liquid nitrogen. Regenerated shoots showed no differences in length and leaf shape compared to the mother plant. Multiplication rate and rooting ability of cryopreserved shoots were lower than those of untreated controls after one subculture, but were completely restored following the third subculture. Fifteen cryopreserved lines derived from single buds were used for genetic analyses by RAPDs and SSRs, in comparison with the mother plant. In RAPD analysis, of a total of 24 primers, only 15 showed reproducible and well resolved bands and were further used. These primers produced a total of 66 fragments ranging from about 500 to 2500 base pair size. SSR (microsatellite) marker amplification was performed using 19 primers which produced 57 reproducible fragments. Microsatellites fragments ranged from 60 to 600 base pairs. Both RAPDs and SSRs did not reveal any polymorphism between cryopreserved lines and the original genotype, suggesting that cryopreservation, using encapsulation-dehydration, does not affect genetic stability of wild pear.