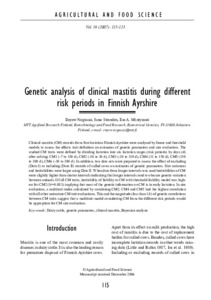 Clinical mastitis (CM) records from first-lactation Finnish Ayrshire were analysed by linear and threshold models to assess the effects trait definition on estimates of genetic parameters and sire evaluation. The studied CM traits were defined by dividing lactation into six lactation stages (risk periods) by days (d) after calving: CM1 (-7 to 150 d), CM2 (-30 to 30 d), CM3 (-30 to 150 d), CM4 (31 to 150 d), CM5 (150 to 300 d), CM6 (-30 to 300 d). In addition, two data sets were prepared to assess the effect of excluding (Data I) or including (Data II) records of culled cows on estimates of genetic parameters. Sire variances and heritabilities were larger using Data II. When data from longer intervals was used heritabilities of CM were slightly higher than shorter intervals indicating that longer intervals tend to obscure genetic variation between animals. Of all CM traits, heritability of liability to CM with threshold-liability model was highest for CM2 (h2=0.083) implying that most of the genetic information on CM is in early lactation. In sire evaluation, a multitrait index calculated by combining CM2, CM4 and CM5 had the highest correlation with all other univariate CM trait evaluations. This and the magnitude (less than 1.0) of genetic correlations between CM traits suggest that a multitrait model considering CM from the different risk periods would be appropriate for CM sire evaluation.