Double stimulation for collaborative transformation of agricultural systems: The role of models for building agency 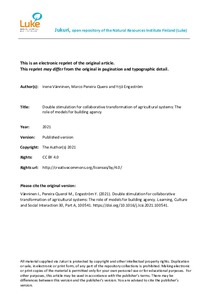 This article describes an investigation into how to build agency among growers so they take the lead in transforming their own activity of managing whiteflies. The study shows how the principle of Transformative Agency by Double Stimulation (TADS) was applied in a formative intervention based on the Change Laboratory method for developing pest management among greenhouse vegetable producers in Finnish Ostrobothnia. The data comprise audio recorded sessions, documentary data and observations produced and collected during the intervention. The results show how the collective construction of a continuous series of models during the intervention played an important role in learning, prompting TADS among the participants and working as a communication tool for the practitioners' different conceptualizations of the problem and possible solutions. The models allowed materializing and expanding the way the participants understood the temporal, functional and spatial aspects of the problem. In the study, TADS took place through conflict of stimuli and motives, first stimulus, auxiliary breaking-away second stimulus, and actions that were initiated to improve the management of the problem at hand. In conclusion, the principle of double stimulation was useful to produce transformative agency, helping transform the activity of pest management among the horticultural producers.