Functional profiling of the endometrium transcriptome during preimplantation development in Finnsheep, Texel and their F1 crosses 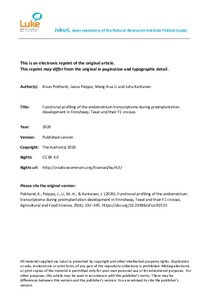 Carefully coordinated interaction between the endometrium and embryo is critical for the establishment and main-tenance of pregnancy in mammals. By exploring the gene expression dynamics of this tissue during preimplanta-tion development, we may be able to get insight into the genetic mechanisms of reproduction during early preg-nancy. Here, we have performed comparative transcriptome profiling of the endometrium in response to spheri-cal (Day 7 to Day 12) and elongated (Day 13 to Day 17) embryos in Finnsheep, Texel and their F1 crosses using RNA sequencing (RNA-seq) approach. A total of 21125 genes were expressed in our dataset of which 554 were signifi-cantly (absolute log2 fold change > 2.5; adjusted p-value < 0.01) upregulated in the endometrium with elongated embryos. Highly abundant autosomal genes in the endometrium were associated with biological processes such as facilitation of maternal recognition of pregnancy, trophoblast elongation and implantation (LGALS15, CST3, CST6, and EEF1A1). Several endogenous retroviruses (ERVs) including a novel ERV gene located in a reduced FecL locus potentially associated with sheep prolificacy were expressed in our dataset. Comparative transcriptome profiling of the endometrium having spherical and elongated embryos revealed distinct gene expression patterns. Genes that were upregulated in response to elongated embryos indicated the importance of immune system at the maternal-embryo interface prior to implantation.