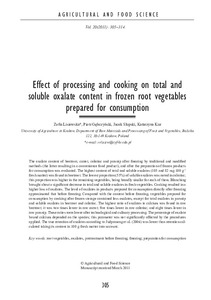 The oxalate content of beetroot, carrot, celeriac and parsnip after freezing by traditional and modified methods (the latter resulting in a convenience food product), and after the preparation of frozen products for consumption was evaluated. The highest content of total and soluble oxalates (105 and 82 mg 100 g-1 fresh matter) was found in beetroot. The lowest proportion (55%) of soluble oxalates was noted in celeriac; this proportion was higher in the remaining vegetables, being broadly similar for each of them. Blanching brought about a significant decrease in total and soluble oxalates in fresh vegetables. Cooking resulted in a higher loss of oxalates. The level of oxalates in products prepared for consumption directly after freezing approximated that before freezing. Compared with the content before freezing, vegetables prepared for consumption by cooking after frozen storage contained less oxalates, except for total oxalates in parsnip and soluble oxalates in beetroot and celeriac. The highest ratio of oxalates to calcium was found in raw beetroot; it was two times lower in raw carrot; five times lower in raw celeriac; and eight times lower in raw parsnip. These ratios were lower after technological and culinary processing. The percentage of oxalate bound calcium depended on the species; this parameter was not significantly affected by the procedures applied. The true retention of oxalates according to Judprasong et al. (2006) was lower than retention calculated taking its content in 100 g fresh matter into account.