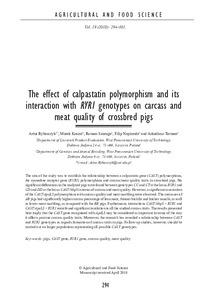 The aim of the study was to establish the relationship between a calpastatin gene (CAST) polymorphism, the ryanodine receptor gene (RYR1) polymorphism and carcass/meat quality traits in crossbred pigs. No significant differences in the analyzed pigs were found between genotypes CC and CT at the locus RYR1 and CD and DD at the locus CAST/MspI in terms of carcass and meat quality. However, a significant association of the CAST/ApaLI polymorphism with carcass quality and meat marbling were observed. The carcasses of AB pigs had significantly higher carcass percentage of lean meat, thinner backfat and thicker muscle, as well as lower meat marbling, as compared with the BB pigs. Furthermore, interactions CAST/MspI × RYR1 and CAST/ApaLI × RYR1 were found significant in relation to all the studied carcass traits. The results presented here imply that the CAST gene recognized with ApaLI may be considered as important in terms of the way it affects porcine carcass quality traits. Moreover, the research has revealed a relationship between CAST and RYR1 genotypes as regards formation of carcass traits in pigs. Follow-up studies, however, should be carried out on larger populations representing all possible CAST genotypes.