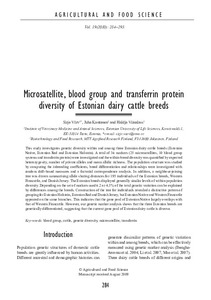 This study investigates genetic diversity within and among three Estonian dairy cattle breeds (Estonian Native, Estonian Red and Estonian Holstein). A total of 36 markers (25 microsatellites, 10 blood group systems and transferrin protein) were investigated and the within-breed diversity was quantified by expected heterozygosity, number of private alleles and mean allelic richness. The population structure was studied by computing the inbreeding coefficients, breed differentiation and relationships were investigated with random drift-based measures and a factorial correspondence analysis. In addition, a neighbour-joining tree was drawn summarising allele sharing distances for 195 individuals of the Estonian breeds, Western Finncattle, and Danish Jersey. The Estonian breeds displayed generally similar levels of within-population diversity. Depending on the set of markers used 6.2 or 4.3% of the total genetic variation can be explained by differences among the breeds. Construction of the tree for individuals revealed a distinctive pattern of grouping for Estonian Holstein, Estonian Red and Danish Jersey, but Estonian Native and Western Finncattle appeared on the same branches. This indicates that the gene pool of Estonian Native largely overlaps with that of Western Finncattle. However, our genetic marker analysis shows that the three Estonian breeds are genetically differentiated, suggesting that the current gene pool of Estonian dairy cattle is diverse.