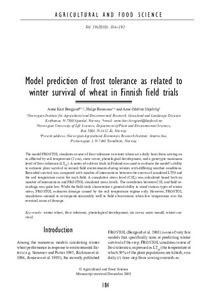 The model FROSTOL simulates course of frost tolerance in winter wheat on a daily basis from sowing on as affected by soil temperature (2 cm), snow cover, phenological development, and a genotypic maximum level of frost tolerance (LT50). A series of cultivar trials in Finland was used to evaluate the model's ability to estimate plant survival in natural field environments during winters with differing weather conditions. Recorded survival was compared with number of intersections between the curves of simulated LT50 and the soil temperature curve for each field. A cumulative stress level (CSL) was calculated based both on number of intersections and FROSTOL simulated stress levels. The correlation between CSL and field recordings was quite low. While the field trials characterize a general ability to stand various types of winter stress, FROSTOL estimates damage caused by the soil temperature regime only. However, FROSTOL simulations seemed to correspond reasonably well to field observations when low temperature was the eventual cause of damage.