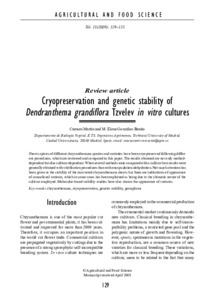 Shoots apices of different chrysanthemum species and varieties have been cryopreserved following different procedures, which are reviewed and compared in this paper. The results obtained are not only methoddependant but also cultivar-dependant. When several methods were compared with a cultivar best results were generally obtained with vitrification procedures than with encapsulation-dehydration. Not much attention has been given to the stability of the recovered chrysanthemum shoots but there are indications of appearance of somaclonal variants, which in some cases has been explained as being due to the chimeric nature of the cultivar employed. Molecular-based stability studies have also shown the appearance of variants.