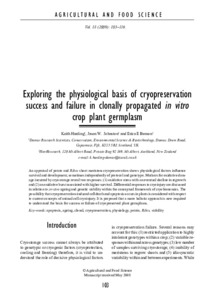 An appraisal of potato and Ribes shoot meristem cryopreservation shows physiological factors influence survival and development, sometimes independently of protocol and genotype. Markers for oxidative damage incurred by cryostorage reveal two responses: (1) oxidative stress with an eventual decline in regrowth and (2) an oxidative burst associated with higher survival. Differential responses to cryoinjury are discussed in relation to in vitro ageing and genetic stability within the conceptual framework of cryobionomics. The possibility that cryopreservation-induced cell death and apoptosis occurs in plants is considered with respect to current concepts of animal cell cryoinjury. It is proposed that a more holistic approach is now required to understand the basis for success or failure of cryopreserved plant germplasm.