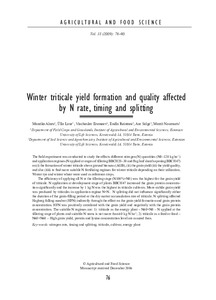 The field experiment was conducted to study the effects different nitrogen (N) quantities (N0 120 kg ha-1) and application regimes (N applied at stages of tillering BBCH28 30 and flag leaf sheath opening BBCH47) on (i) the formation of winter triticale above ground biomass (AGB), (ii) the grain yield (iii) the yield quality, and also (iiii) to find more suitable N fertilizing regimes for winter triticale depending on their utilization. Winter rye and winter wheat were used as reference crops. The efficiency of applying all N at the tillering stage (N100%+N0) was the highest for the grain yield of triticale. N application at development stage of plants BBCH47 increased the grain protein concentration significantly and the increase by 1 kg N was the highest in triticale cultivars. More stabile grain yield was produced by triticales in application regime N+N. N splitting did not influence significantly either the duration of the grain-filling period or the dry matter accumulation rate of triticale. N splitting affected Hagberg falling number (HFN) indirectly through the effect on the grain yield formation and grain protein concentration. HFN was positively correlated with the grain yield and negatively with the grain protein concentration. The suitable N regimes are: 1) triticale as the energy plant N60+N0 N applied at the tillering stage of plants and suitable N norm is not more than 60 kg N ha-1; 2) triticale as a feed or food N60+N60 High grain yield, protein and lysine concentration level are assured then.