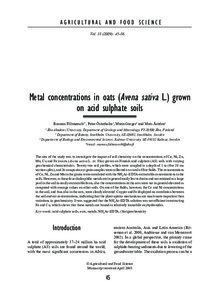 The aim of the study was to investigate the impact of soil chemistry on the concentrations of Co, Ni, Zn, Mn, Cu and Fe in oats (Avena sativa L. cv. Fiia) grown on Finnish acid sulphate (AS) soils with varying geochemical characteristics. Twenty two soil profiles, which were sampled to a depth of 1 m (five 20 cm section splits), and 26 composite oat grain samples were collected on a total of five fields. The concentrations of Co, Ni, Zn and Mn in the grains were correlated with the NH4Ac-EDTA-extractable concentrations in the soils. However, as these four chalcophilic metals are in general easily lost to drains and not retained as a large pool in the soil in easily-extractable form, also the concentrations in the oats were not in general elevated as compared with average values on other soils. On one of the fields, however, the Co and Ni concentrations in the soil, and thus also in the oats, were clearly elevated. Copper and Fe displayed no correlation between the soil and oat concentrations, indicating that the plant-uptake mechanisms are much more important than variations in geochemistry. It was suggested that the NH4Ac-EDTA solution was not efficient in extracting Fe and Cu, which shows that these metals are bound in relatively immobile oxyhydroxides.