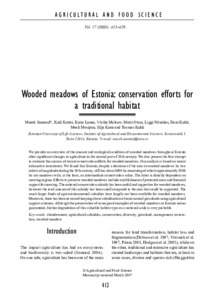 We provide an overview of the amount and ecological condition of wooded meadows throughout Estonia after significant changes in agriculture in the second part of 20th century. We also present the first attempt to estimate the success of recent conservation efforts for wooded meadows. Our analysis is based on recent exhaustive inventories. We found that Estonia, despite a decrease of the area in wooded meadows by two orders of magnitude during the 20th century, still has about 8400 ha remaining of which approximately 5800 ha are meadows with, at the least, an intermediate conservation value. The latter is directly dependent on mowing regime. Efforts to preserve wooded meadows include establishment of protected areas and financial support for mowing. The national conservation subsidy has been useful and supportive for wooded meadows, however the total amount of this subsidy has been small compared to the area that could be supported. The much larger funds of agri-environmental subsidies have largely not been available for wooded meadows. Moreover, there has been no record keeping about subsidisation of semi-natural grasslands using agricultural support schemes. Although the preservation of some good examples of wooded meadows in Estonia seems guaranteed, further degradation of this valuable habitat type on a national scale is very probable.