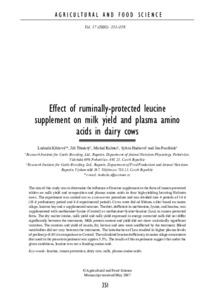 The aim of this study was to determine the influence of leucine supplement in the form of rumen-protected tablets on milk yield and composition and plasma amino acids in four high-yielding lactating Holstein cows. The experiment was carried out as a cross-over procedure and was divided into 4 periods of 14 d (10 d preliminary period and 4 d experimental period). Cows were fed ad libitum a diet based on maize silage, lucerne hay and a supplemental mixture. The diet, defficient in methionine, lysine, and leucine, was supplemented with methionine+lysine (Control) or methionine+lysine+leucine (Leu) in rumen protected form. The dry matter intake, milk yield and milk yield expressed in energy corrected milk did not differ significantly between the treatments. Milk protein content and yield did not show statistically significant variation. The contents and yield of casein, fat, lactose and urea were unaffected by the treatment. Blood metabolites did not vary between the treatments. The introduction of Leu resulted in higher plasma levels of proline (p<0.05) in comparison to Control. The calculated leucine defficiency in maize silage-concentrate diet used in the present experiment was approx 5.5%. The results of this experiment suggest that under the given conditions, leucine was not a limiting amino acid.