Variability of herbage production in mixed leys as related to ley age and environmental factors: a farm survey 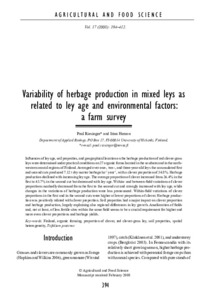