The effects of selenate and sulphate supply on the accumulation and volatilization of Se by cabbage, kohlrabi and alfalfa plants grown hydroponically 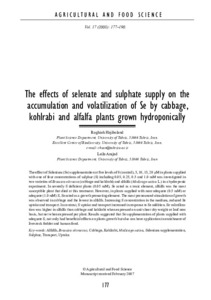 The effect of Selenium (Se) supplementation at five levels of 0 (control), 5, 10, 15, 20 ìM in plants supplied with one of four concentrations of sulphur (S) including 0.05, 0.25, 0.5 and 1.0 mM was investigated in two varieties of Brassica oleracea (cabbage and kohlrabi) and alfalfa (Medicago sativa L.) in a hydroponic experiment. In severely S deficient plants (0.05 mM), Se acted as a toxic element, alfalfa was the most susceptible plant that died at this treatment. However, in plants supplied with near adequate (0.5 mM) or adequate (1.0 mM) S, Se acted as a growth promoting element. The most pronounced stimulation of growth was observed in cabbage and the lowest in alfalfa. Increasing S concentration in the medium, reduced Se uptake and transport. In contrast, S uptake and transport increased in response to Se addition. Se volatilization was higher in alfalfa than cabbage and kohlrabi when expressed on unit shoot dry weight or leaf area basis, but not when expressed per plant. Results suggested that Se supplementation of plants supplied with adequate S, not only had beneficial effects on plants growth but also can have application in enrichment of livestock fodder and human food.