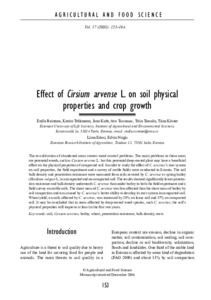 The re-cultivation of abandoned areas creates weed control problems. The main problems in these areas are perennial weeds, such as Cirsium arvense L. but this perennial deep-rooted plant may have a beneficial effect on the physical properties of compacted soil. In order to study the effect of C. arvense s root system on soil properties, the field experiment and a survey of arable fields were conducted in Estonia. The soil bulk density and penetration resistance were measured from soils covered by C. arvense or spring barley (Hordeum vulgare L.) on compacted and un-compacted soil. The results showed significantly lower penetration resistance and bulk density underneath C. arvense than under barley in both the field experiment and a field survey on arable soils. The shoot mass of C. arvense was less affected than the shoot mass of barley by soil compaction and was caused by C. arvense s better ability to develop its root system in compacted soil. Wheat yield, on soils affected by C. arvense, was increased by 28% on loose soil and 37% on compacted soil. It may be concluded that in areas affected by deep-rooted weed species, such C. arvense, the soil s physical properties will improve at least in the first two years.