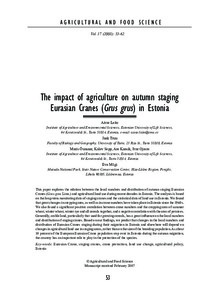 This paper explores the relation between the local numbers and distribution of autumn staging Eurasian Cranes (Grus grus Linn.) and agricultural land use during recent decades in Estonia. The analysis is based on the long-term monitoring data of staging cranes and the statistical data of land use in Estonia. We found that great changes in cropping area, as well as in crane numbers have taken place in Estonia since the 1960s. We also found a significant positive correlation between crane numbers and the cropping area of summer wheat, winter wheat, winter rye and all cereals together, and a negative correlation with the area of potatoes. Generally, arable land, particularly that used for growing cereals, has a great influence on the local numbers and distribution of staging cranes. Based on our findings, we predict that changes in the local numbers and distribution of Eurasian Cranes staging during their migration in Estonia and elsewhere will depend on changes in agricultural land use in staging areas, rather than on the size of the breeding population. As about 10 percent of the European Eurasian Crane population stop over in Estonia during the autumn migration, the country has an important role to play in the protection of the species.