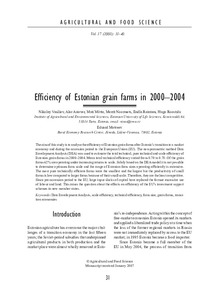 The aim of this study is to analyse the efficiency of Estonian grain farms after Estonia s transition to a market economy and during the accession period to the European Union (EU). The non-parametric method Data Envelopment Analysis (DEA) was used to estimate the total technical, pure technical and scale efficiency of Estonian grain farms in 2000 2004. Mean total technical efficiency varied from 0.70 to 0.78. Of the grain farms 62% are operating under increasing returns to scale. Solely based on the DEA model it is not possible to determine optimum farm scale and the range of Estonian farm sizes operating efficiently is extensive. The most pure technically efficient farms were the smallest and the largest but the productivity of small farms is low compared to larger farms because of their small scale. Therefore, they are the least competitive. Since pre-accession period to the EU, large input slacks of capital have replaced the former excessive use of labour and land. This raises the question about the effects on efficiency of the EU s investment support schemes in new member states.