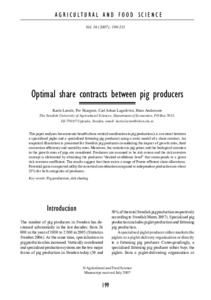 This paper analyses the economic benefits from vertical coordination in pig production (i.e. a contract between a specialised piglet and a specialised fattening pig producer) using a static model of a share contract. An empirical illustration is presented for Swedish pig producers considering the impact of growth rates, feed conversion efficiency and mortality rates. Moreover, the variation in pig prices and the biological variation in the growth rates of pigs are considered. Producers are assumed to be risk averse and the risk aversion concept is elaborated by obtaining the producers desired confidence level that corresponds to a given risk aversion coefficient. The results suggest that there exists a range of Pareto efficient share allocations. Potential gains in expected utility from vertical coordination compared to independent production are about 25% for both categories of producers.