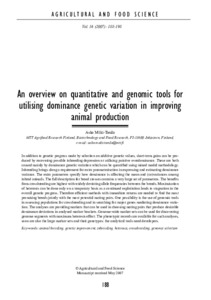 In addition to genetic progress made by selection on additive genetic values, short-term gains can be produced by recovering possible inbreeding depression or utilising putative overdominance. These are both caused mainly by dominance genetic variation which can be quantified using mixed model methodology. Inbreeding brings along a requirement for extra parameterisation in expressing and estimating dominance variance. The extra parameters specify how dominance is affecting the mean and (co)variances among inbred animals. The full description for breed crosses contains a very large set of parameters. The benefits from crossbreeding are highest with widely deviating allele frequencies between the breeds. Maximisation of heterosis can be done only on a temporary basis as a continued exploitation leads to stagnation in the overall genetic progress. Therefore efficient methods with immediate returns are needed to find the most promising breeds jointly with the most potential mating pairs. One possibility is the use of genomic tools in assessing populations for crossbreeding and in searching for major genes mediating dominance variation. The analyses are providing markers that can be used in choosing mating pairs that produce desirable dominance deviations in analysed marker brackets. Genome-wide marker sets can be used for discovering genome segments with maximum heterosis effect. The phenotypic records are available for such analyses, soon are also the large marker sets and their genotypes: the analytical tools need developers.