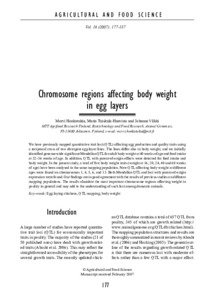 We have previously mapped quantitative trait loci (QTL) affecting egg production and quality traits using a reciprocal cross of two divergent egg-layer lines. The lines differ also in body weight, and we initially identified genome-wide significant Mendelian QTL for adult body weight at 40 weeks of age and feed intake at 32 36 weeks of age. In addition, QTL with parent-of-origin effects were detected for feed intake and body weight. In the present study, a total of five body weight traits (weight at 16, 20, 24, 40 and 60 weeks of age) have been analysed in the same mapping population. New QTL affecting body weight at different ages were found on chromosomes 1, 4, 5, 6, and 13. Both Mendelian QTL and loci with parent-of-origin expression were found. Our findings are in good agreement with the results of previous studies on different mapping populations. The results elucidate the most important chromosome regions affecting weight in poultry in general and may add to the understanding of such loci among domestic animals.