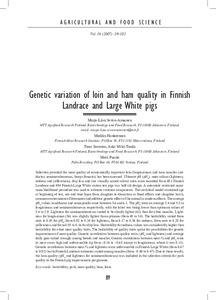 Selection potential for meat quality of economically important loin (longissimus) and ham muscles (adductor, semimembranosus, biceps femoris) has been assessed. Ultimate pH (pHu), meat colour (lightness, redness and yellowness), drip loss and two visually scored colour traits were recorded from 483 Finnish Landrace and 494 Finnish Large White station test pigs in a half-sib design. A univariate restricted maximum likelihood procedure was used to estimate variance components. The statistical model contained age at beginning of test, sex and time lapse from slaughter to dissection as fixed effects and slaughter batch, common environment of littermates and additive genetic effect of the animal as random effects. The average pHu values in adductor and semispinalis were between 5.6 and 6.1. The pHu were on average 5.4 and 5.5 in longissimus and semimembranosus respectively, with the latter two being lower than optimum values of 5.6 to 5.9. Lightness for semimembranosus turned to be clearly lighter (62) than for other muscles. Lightness for longissimus (56) was slightly lighter than optimum (from 48 to 54). The heritability varied from zero to 0.45 for pHu, from 0.02 to 0.34 for lightness, from 0.17 to 0.56 for redness, from zero to 0.28 for yellowness and from 0.05 to 0.16 for drip loss. Heritability for redness values was considerably higher than heritability for other meat quality traits. The heritability of quality traits spoke for possibilities for genetic improvement of meat quality. Genetic correlations between quality traits (pHu and lightness) and average daily gain varied strongly among breeds and muscles. Genetic correlations between meat-% and pHu were in most cases high and unfavourable (rg from 0.36 to 0.68 except in longissimus, where it was 0.11). Genetic correlations between meat-% and lightness were unfavourable in Finnish Large White (from 0.47 to 0.92) but in Finnish Landrace estimates varied among muscles (from 0.40 to 0.47). Due to these results, the ham quality (pHu and lightness for semimembranosus) was included in the selection criteria for pork quality in the Finnish pig improvement programme.