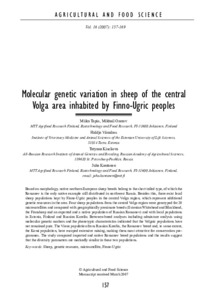 Based on morphology, native northern European sheep breeds belong to the short tailed type, of which the Romanov is the only native example still distributed in northwest Russia. Besides this, there exist local sheep populations kept by Finno-Ugric peoples in the central Volga region, which represent additional genetic resources in the area. Four sheep populations from the central Volga region were genotyped for 20 microsatellites and compared with geographically proximate breeds (Estonian Whitehead and Blackhead, the Finnsheep and an exported and a native population of Russian Romanov) and with local populations in Estonia, Finland and Russian Karelia. Between-breed analyses including admixture analysis using molecular genetic markers and the phenotypic characteristics indicated that the Volgaic populations have not remained pure. The Viena population from Russian Karelia, the Romanov breed and, to some extent, the Komi population, have escaped extensive mixing, making them most attractive for conservation programmes. The study compared imported and native Romanov breed populations and the results suggest that the diversity parameters are markedly similar in these two populations.