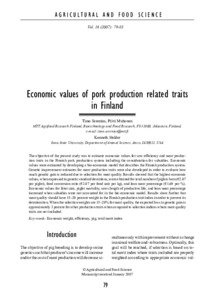 The objective of the present study was to estimate economic values for sow efficiency and meat production traits in the Finnish pork production system including the consideration for subsidies. Economic values were estimated by developing a bio-economic model that describes the Finnish production system. Genetic improvement estimates for meat production traits were also developed in order to evaluate how much genetic gain is reduced due to selection for meat quality. Results showed that the highest economic values, when expressed in genetic standard deviations, were obtained for total number of piglets born ( 2.07 per piglet), feed conversion ratio ( 2.07 per feed unit per kg), and lean meat percentage ( 1.69 per %). Economic values for litter size, piglet mortality, sows length of productive life, and lean meat percentage increased when subsidies were not accounted for in the bio-economic model. Results show further that meat quality should have 15 20 percent weight in the Finnish production trait index in order to prevent its deterioration. When the selection weights are 15 20% for meat quality, the expected loss in genetic gain is approximately 3 percent for other production traits when compared to selection indices where meat quality traits are not included.