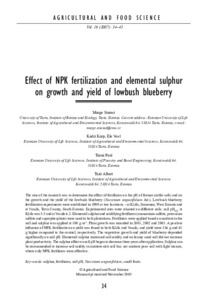 The aim of the research was to determine the effect of fertilizers on the pH of former arable soils and on the growth and the yield of the lowbush blueberry (Vaccinium angustifolium Ait.). Lowbush blueberry fertilization experiments were established in 1999 at two locations at Kärla, Saaremaa, West Estonia and at Vasula, Tartu County, South Estonia. Experimental sites were situated on different soils: soil pHKCl at Kärla was 5.5 and at Vasula 6.2. Elemental sulphur and acidifying fertilizers (ammonium sulfate, potassium sulfate and superphosphate) were used in both plantations. Fertilizers were applied based on nutrient in the soil and sulphur was applied at 100 g m 2. Plant growth was recorded in 2001, 2002 and 2003. A positive influence of NPK fertilization on yield was found in both Kärla and Vasula, and yield were 336 g and 41 g higher compared to the control, respectively. The vegetative growth and yield of blueberry depended significantly on soil pH. Elemental sulphur increased soil acidity and on loamy sand soil did not increase plant productivity. The sulphur effect on soil pH began to decrease three years after application. Sulphur can be recommended to increase soil acidity in nutrient-rich soil but, not nutrient poor soil with light texture, where only NPK fertilizers were effective.