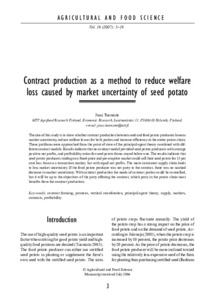 The aim of this study is to show whether contract production between seed and food potato producers lessens market uncertainty, reduce welfare losses for both parties and increase efficiency in the entire potato chain. These problems were approached from the point of view of the principal-agent theory combined with different contract models. Results indicate that no contract model provided seed potato producers with average positive net profits, and profitability ratios for seed potato farms stayed below one. The results indicate that seed potato producers trading on a fixed-price and pre-emptive market could sell their seed potato for 13 per cent less than on a transaction market, but with equal net profits. The more consistent supply chain leads to less market uncertainty. If the food potato producer was not party to the contract, there was no marked decrease in market uncertainty. With contract production the needs of contract parties could be controlled, but it will be up to the objectives of the party offering the contract, which party in the potato chain most benefits from the contract production.