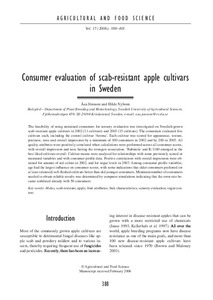 The feasibility of using untrained consumers for sensory evaluation was investigated on Swedish-grown scab-resistant apple cultivars in 2002 (11 cultivars) and 2003 (15 cultivars). The consumers evaluated five cultivars each, including the control cultivar Aroma . Each cultivar was scored for appearance, texture, juiciness, taste and overall impression by a minimum of 100 consumers in 2002 and by 200 in 2003. All quality attributes were positively correlated when calculations were performed across all consumer scores, with overall impression and taste having the strongest association. Rubinola and K:1160 emerged as the best liked cultivars overall. Cultivar means were analysed for relationships with some previously scored or measured variables and with consumer profile data. Positive correlations with overall impression were obtained for amount of red colour in 2002, and for sugar levels in 2003. Among consumer profile variables, age had the largest influence on consumer scores, with some indications that older consumers preferred (or at least tolerated) soft-fleshed cultivars better than did younger consumers. Minimum number of consumers needed to obtain reliable results was determined by computer simulations indicating that the error rate became stabilized already with 50 consumers.