Insect pests and their natural enemies on spring oilseed rape in Estonia : impact of cropping systems 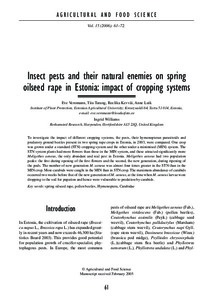 To investigate the impact of different cropping systems, the pests, their hymenopteran parasitoids and predatory ground beetles present in two spring rape crops in Estonia, in 2003, were compared. One crop was grown under a standard (STN) cropping system and the other under a minimised (MIN) system. The STN system plants had more flowers than those in the MIN system, and these attracted significantly more Meligethes aeneus, the only abundant and real pest in Estonia. Meligethes aeneus had two population peaks: the first during opening of the first flowers and the second, the new generation, during ripening of the pods. The number of new generation M. aeneus was almost four times greater in the STN than in the MIN crop. More carabids were caught in the MIN than in STN crop. The maximum abundance of carabids occurred two weeks before that of the new generation of M. aeneus, at the time when M. aeneus larvae were dropping to the soil for pupation and hence were vulnerable to predation by carabids.