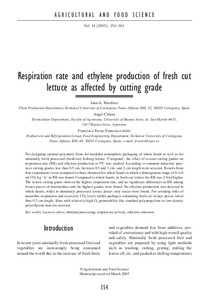 For designing optimal polymeric films for modified atmosphere packaging of whole heads as well as for minimally fresh processed (fresh-cut) Iceberg lettuce Coolguard , the effect of several cutting grades on respiration rate (RR) and ethylene production at 5ºC was studied. According to common industrial practices cutting grades less than 0.5 cm, between 0.5 and 1 cm, and 2 cm length were selected. Results from four experiments were compared to those obtained for whole heads in which a homogenous range of 6 to 8 ml CO2 kg-1 h-1 in RR was found. Compared to whole heads, in fresh-cut lettuce the RR was 2-fold higher. The lowest cutting grade showed the highest respiration rate, and no significant differences in RR among lettuce pieces of intermediate and the highest grades were found. No ethylene production was detected in whole heads, while in minimally processed lettuce pieces only traces were found. For avoiding risks of anaerobic respiration and excessive CO2 levels within packages containing fresh-cut lettuce pieces lower than 0.5 cm length, films with relatively high O2 permeability like standard polypropylene or low-density polyethylene must be selected.