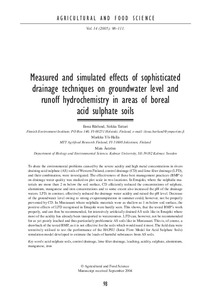 To abate the environmental problems caused by the severe acidity and high metal concentrations in rivers draining acid sulphate (AS) soils of Western Finland, control drainage (CD) and lime filter drainage (LFD), and their combination, were investigated. The effectiveness of these best management practices (BMP s) on drainage water quality was studied on plot scale in two locations. In Ilmajoki, where the sulphidic materials are more than 2 m below the soil surface, CD efficiently reduced the concentrations of sulphate, aluminium, manganese and iron concentrations and to some extent also increased the pH of the drainage waters. LFD, in contrast, effectively reduced the drainage water acidity and raised the pH level. Decrease of the groundwater level owing to strong evapotranspiration in summer could, however, not be properly prevented by CD. In Mustasaari where sulphidic materials were as shallow as 1 m below soil surface, the positive effects of LFD recognised in Ilmajoki were hardly seen. This shows, that the tested BMP s work properly, and can thus be recommended, for intensively artificially drained AS soils like in Ilmajoki where most of the acidity has already been transported to watercourses. LFD can, however, not be recommended for as yet poorly leached and thus particularly problematic AS soils like in Mustasaari. This is, of course, a drawback of the tested BMP, as it is not effective for the soils which would need it most. The field data were tentatively utilised to test the performance of the HAPSU (Ionic Flow Model for Acid Sulphate Soils) simulation model developed to estimate the loads of harmful substances from AS soils.