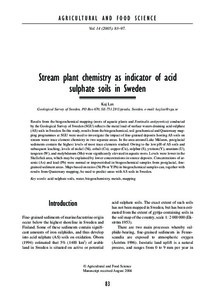 Results from the biogeochemical mapping (roots of aquatic plants and Fontinalis antipyretica) conducted by the Geological Survey of Sweden (SGU) reflects the metal load of surface waters draining acid sulphate (AS) soils in Sweden. In this study, results from the biogeochemical, soil geochemical and Quaternary mapping programmes at SGU were used to investigate the impact of fine-grained deposits hosting AS soils on stream water trace element chemistry in two separate areas. In the area around Lake Mälaren, postglacial sediments contain the highest levels of most trace elements studied. Owing to the low pH of AS soils and subsequent leaching, levels of nickel (Ni), cobalt (Co), copper (Cu), sulphur (S), yttrium (Y), uranium (U), tungsten (W), and molybdenum (Mo) were significantly elevated in aquatic roots. Levels were lower in the Skellefteå area, which may be explained by lower concentrations in source deposits. Concentrations of arsenic (As) and lead (Pb) were normal or impoverished in biogeochemical samples from postglacial, finegrained sediment areas. Maps based on ratios (Ni:Pb or Y:Pb) in biogeochemical samples can, together with results from Quaternary mapping, be used to predict areas with AS soils in Sweden.