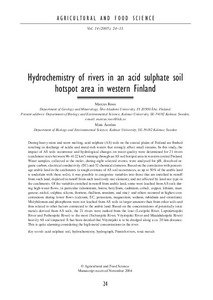 During heavy rains and snow melting, acid sulphate (AS) soils on the coastal plains of Finland are flushed resulting in discharge of acidic and metal-rich waters that strongly affect small streams. In this study, the impact of AS soils occurrence and hydrological changes on water quality were determined for 21 rivers (catchment sizes between 96 4122 km2) running through an AS soil hotspot area in western central Finland. Water samples, collected at the outlet, during eight selected events, were analysed for pH, dissolved organic carbon, electrical conductivity (EC) and 32 chemical elements. Based on the correlation with percentage arable land in the catchments (a rough estimate of AS soil occurrences, as up to 50% of the arable land is underlain with these soils), it was possible to categorize variables into those that are enriched in runoff from such land, depleted in runoff from such land (only one element), and not affected by land-use type in the catchments. Of the variables enriched in runoff from arable land, some were leached from AS soils during high-water flows, in particular (aluminium, boron, beryllium, cadmium, cobalt, copper, lithium, manganese, nickel, sulphur, silicon, thorium, thallium, uranium, and zinc) and others occurred in highest concentrations during lower flows (calcium, EC, potassium, magnesium, sodium, rubidium and strontium). Molybdenum and phosphorus were not leached from AS soils in larger amounts than from other soils and thus related to other factors connected to the arable land. Based on the concentrations of potentially toxic metals derived from AS soils, the 21 rivers were ranked from the least (Lestijoki River, Lapväärtinjoki River and Perhonjoki River) to the most (Sulvanjoki River, Vöyrinjoki River and Maalahdenjoki River) heavily AS soil impacted. It has been decided that Vöyrinjoki is to be dredged along a ca. 20 km distance. This is quite alarming considering the high metal concentrations in the river.