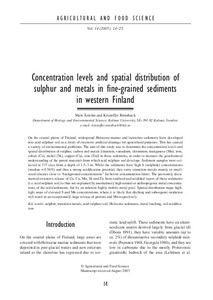 On the coastal plains of Finland, widespread Holocene marine and lacustrine sediments have developed into acid sulphate soil as a result of extensive artificial drainage for agricultural purposes. This has caused a variety of environmental problems. The aim of this study was to determine the concentration levels and spatial distribution of sulphur, carbon and metals [titanium, vanadium, chromium, manganese (Mn), iron, cobalt (Co), nickel (Ni), copper (Cu), zinc (Zn)] in these sediments, in order to increase the geochemical understanding of the parent materials from which acid sulphate soil develops. Sediment samples were collected at 317 sites from a depth of 1.5 3 m. While the sediments have high S (sulphide) concentrations (median = 0.54%) and thus a strong acidification potential, they carry transition metals mainly in smallsized silicates close to background concentrations far below contamination limits. The previously documented extensive release of Co, Cu, Mn, Ni and Zn from oxidised and acidified layers of these sediments (i.e. acid sulphate soil) is thus not explained by anomalously high natural or anthropogenic metal concentrations of the soils/sediments, but by an inherent highly mobile metal pool. Spatial-distribution maps highlight areas of elevated S and Mn concentrations, where it is likely that ditching and subsequent oxidation will result in an exceptionally large release of protons and Mn respectively.