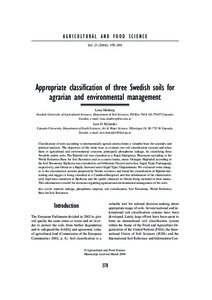 Classification of soils according to internationally agreed criteria forms a valuable base for scientifi c and political analyses. The objectives of this study were to evaluate two soil classification systems and relate them to agricultural and environmental concerns, principally phosphorus leakage, by classifying three Swedish, arable soils. The Bjärröd soil was classifi ed as a Rupti-Endogleyic Phaeozem according to the World Reference Base for Soil Resources and as a coarse-loamy, mesic Oxiaquic Hapludoll according to the Soil Taxonomy. Bjelkesta was classified as an Orthieutric Gleysol and a fi ne, frigid, Typic Endoaquept, respectively, and Götala as a Haplic Arenosol and a frigid Typic Udipsamment. We evaluated some changes to the classification systems proposed by Nordic scientists and found the classification of Bjärröd misleading and suggest it being classified as a Cambisol/Inceptisol and that information of the characteristically high base saturation in Bjelkesta and the spodic character in Götala being included in their names. This information is useful for decisions regarding agrarian and environmental management of the soils.