Meat and bone meal as nitrogen fertilizer to cereals in Norway 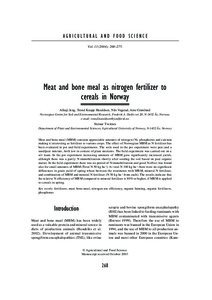 Meat and bone meal (MBM) contains appreciable amounts of nitrogen (N), phosphorus and calcium making it interesting as fertilizer to various crops. The effect of Norwegian MBM as N fertilizer has been evaluated in pot and field experiments. The soils used in the pot experiment were peat and a sand/peat mixture, both low in content of plant nutrients. The field experiment was carried out on a silt loam. In the pot experiment increasing amounts of MBM gave significantly increased yields, although there was a partly N immobilisation shortly after seeding the soil based on peat organic matter. In the field experiment there was no period of N immobilisation and good N effect was found also for small amounts of MBM (Total N 50 kg ha-1). At total N 100 kg ha-1 there were no significant differences in grain yield of spring wheat between the treatments with MBM, mineral N fertilizer, and combination of MBM and mineral N fertilizer (N 50 kg ha-1 from each). The results indicate that the relative N efficiency of MBM compared to mineral fertilizer is 80% or higher, if MBM is applied to cereals in spring.