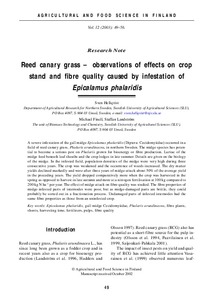 A severe infestation of the gall midge Epicalamus phalaridis (Diptera: Cecidomyiidae)occurred in a field of reed canary grass, Phalaris arundinacea in northern Sweden. The midge species has potential to become a serious pest on Phalaris grown for bioenergy or fibre production. Larvae of the midge feed beneath leaf sheaths and the crop lodges in late summer. Details are given on the biology of the midge. In the infested field, population densities of the midge were very high during three consecutive years. The crop was weakened and the occurrence of weeds increased. The dry matter yields declined markedly and were after three years of midge-attack about 50% of the average yield in the preceding years. The yield dropped comparatively more when the crop was harvested in the spring as opposed to harvest in late autumn and more at a nitrogen fertilisation at 100 kg compared to 200 kg N ha 1 per year. The effect of midge attack on fibre quality was studied. The fibre properties of midge-infested parts of internodes were poor, but as midge-damaged parts are brittle, they could probably be sorted out in a fractionation process. Undamaged parts of infested internodes had the same fibre properties as those from an uninfested crop.