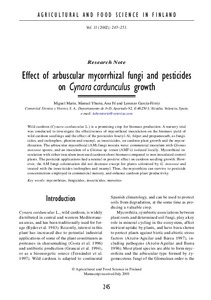 Wild cardoon (Cynara cardunculus L.) is a promising crop for biomass production. A nursery trial was conducted to investigate the effectiveness of mycorrhizal inoculation on the biomass yield of wild cardoon seedlings and the effect of the pesticides fosetyl-Al, folpet and propamocarb, as fungicides, and isofenphos, phoxim and oxamyl, as insecticides, on cardoon plant growth and the mycorrhization. The arbuscular mycorrhizal (AM) fungi inocula were: commercial inoculum with Glomus mosseae spores, and an inoculum of a Glomus sp. strain (AMF-i) isolated locally. Mycorrhizal inoculation with either inoculum increased cardoon shoot biomass compared to non-inoculated control plants. The pesticide applications had a neutral or positive effect on cardoon seedling growth. However, the AM fungi colonisation did not decrease except for plants colonised by G. mosseae and treated with the insecticides isofenphos and oxamyl. Thus, the mycorrhiza can survive to pesticide concentrations employed in commercial nursery, and enhance cardoon plant productivity.