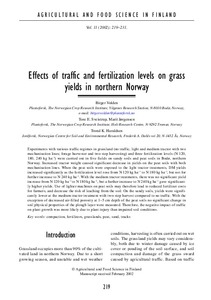 Experiments with various traffic regimes in grassland (no traffic, light and medium tractor with two mechanisation lines; forage harvester and two-step harvesting) and three fertilization levels (N 120, 180, 240 kg ha-1) were carried out in five fields on sandy soils and peat soils in Bodø, northern Norway. Increased tractor weight caused significant decrease in yields on the peat soils with both mechanisation lines. When the peat soils were exposed to the light tractor treatments, DM yields increased significantly as the fertilization level rose from N 120 kg ha-1 to N 180 kg ha-1, but not for further increase to N 240 kg ha-1. With the medium tractor treatments, there was no significant yield increase from N 120 kg ha-1 to N 180 kg ha-1, but a further increase to N 240 kg ha-1 gave significantly higher yields. Use of lighter machines on peat soils may therefore lead to reduced fertilizer costs for farmers, and decrease the risk of leaching from the soil. On the sandy soils, yields were significantly lower at the medium tractor treatment with two-step harvest compared to no traffic. With the exception of decreased air-filled porosity at 1-5 cm depth of the peat soils no significant change in soil physical properties of the plough layer were measured. Therefore, the negative impact of traffic on plant growth was more likely due to plant injury than impaired soil conditions.