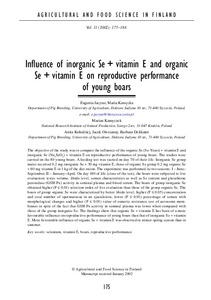 The objective of the study was to compare the influence of the organic Se (Se-Yeast) + vitamin E and inorganic Se (Na2SeO3) + vitamin E on reproductive performance of young boars. The studies were carried on the 80 young boars. A feeding test was started on day 70 of their life. Inorganic Se group males received 0.2 mg inorganic Se + 30 mg vitamin E, those of organic Se group 0.2 mg organic Se + 60 mg vitamin E in 1 kg of the diet ration. The experiment was performed in two seasons: I - June-September, II - January-April. On day 180 of life (close of the test), the boars were subjected to live evaluation: testes volume, libido level, semen characteristics as well as Se content and glutathione peroxidase (GSH-Px) activity in seminal plasma and blood serum. The boars of group inorganic Se obtained higher (P = 0.01) selection index of live evaluation than those of the group organic Se. The boars of group organic Se were characterized by better libido level, higher (P = 0.05) concentration and total number of spermatozoa in an ejaculation, lower (P = 0.01) percentage of semen with morphological changes and higher (P = 0.01) value of osmotic resistance test of acrosome membranes in spite of the fact that GSH-Px activity in seminal plasma was lower when compared with those of the group inorganic Se. The findings show that organic Se + vitamin E has been of a more favourable influence on reproductive performance of young boars than that of inorganic Se + vitamin E. More favourable influence of organic Se + vitamin E was observed in winter-spring season than in summer.