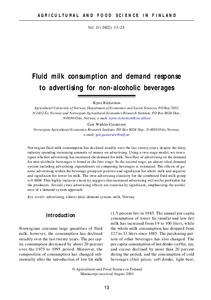 Norwegian fluid milk consumption has declined steadily over the last twenty years, despite the dairy industry spending increasing amounts of money on advertising. Using a two-stage model, we investigate whether advertising has increased the demand for milk. No effect of advertising on the demand for non-alcoholic beverages is found in the first stage. In the second stage, an almost ideal demand system including advertising expenditures on competing beverages is estimated. The effects of generic advertising within the beverage group are positive and significant for whole milk and negative and significant for lower fat milk. The own-advertising elasticity for the combined fluid milk group is 0.0008. This highly inelastic elasticity suggests that increased advertising will not be profitable for the producers. Several cross-advertising effects are statistically significant, emphasizing the usefulness of a demand system approach.