The success of the diversified farm - resource-based view 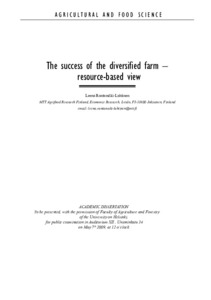 Farms and rural areas have many specific valuable resources that can be used to create non-agricultural products and services. Most of the research regarding on-farm diversification has hitherto concentrated on business start-up or farm survival strategies. Resource allocation and also financial success have not been the primary focus of investigations as yet. In this study these specific topics were investigated i.e. resource allocation and also the financial success of diversified farms from a farm management perspective. The key question addressed in this dissertation, is how tangible and intangible resources of the diversified farm affect the financial success. This study s theoretical ackground deals with resource-based theory, and also certain themes of the theory of learning organisation and other decision-making theories. Two datasets were utilised in this study. First, data were collected by postal survey in 2001 (n = 663). Second, data were collected in a follow-up survey in 2006 (n = 439). Data were analysed using multivariate data analyses and path analyses. The study results reveal that, diversified farms performed differently. Success and resources were linked. Professional and management skills affected other resources, and hence directly or indirectly influenced success per se. In the light of empirical analyses of this study, tangible and intangible resources owned by the diversified farm impacted on its financial success. The findings of this study underline the importance of skills and networks for entrepreneur(s). Practically speaking all respondents of this study used either agricultural resources for non-farm businesses or non-farm resources for agricultural enterprises. To share resources in this way was seen as a pragmatic opportunity recognised by farmers. One of the downsides of diversification might be the phenomenon of over-diversification, which can be defined as the situation in which a farm diversifies beyond its optimal limit. The empirical findings of this study reveal that capital and labour resource constrains did have adverse effects on financial success. The evidence indicates that farms that were capital and labour resource constrained in 2001 were still less profitable than their no problems counterparts five years later.