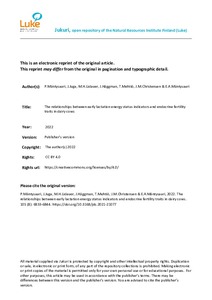 The relationships between dairy cow milk-based energy status (ES) indicators and fertility traits were studied during periods 8 to 21, 22 to 35, 36 to 49, and 50 to 63 d in milk. Commencement of luteal activity (C-LA) and interval from calving to the first heat (CFH), based on frequent measurements of progesterone by the management tool Herd Navigator (DeLaval), were used as fertility traits. Energy status indicator traits were milk β-hydroxybutyrate (BHB) concentration provided by Herd Navigator and milk fat:protein ratio, concentration of C18:1 cis-9, the ratio of fatty acids (FA) C18:1 cis-9 and C10:0 in test-day milk samples, and predicted plasma concentration of nonesterified fatty acids (NEFA) on test days. Plasma NEFA predictions were based either directly on milk mid-infrared spectra (MIR) or on milk fatty acids based on MIR spectra (NEFAmir and NEFAfa, respectively). The average (standard deviation) C-LA was 39.3 (±16.6) days, and the average CFH was 50.7 (±17.2) days. The correlations between fertility traits and ES indicators tended to be higher for multiparous (r < 0.28) than for primiparous (r < 0.16) cows. All correlations were lower in the last period than in the other periods. In period 1, correlations of C-LA with NEFAfa and BHB, respectively, were 0.15 and 0.14 for primiparous and 0.26 and 0.22 for multiparous cows. The associations between fertility traits and ES indicators indicated that negative ES during the first weeks postpartum may delay the onset of luteal activity. Milk FPR was not as good an indicator for cow ES as other indicators. According to these findings, predictions of plasma NEFA and milk FA based on milk MIR spectra of routine test-day samples and the frequent measurement of milk BHB by Herd Navigator gave equally good predictions of cow ES during the first weeks of lactation. Our results indicate that routinely measured milk traits can be used for ES evaluation in early lactation.