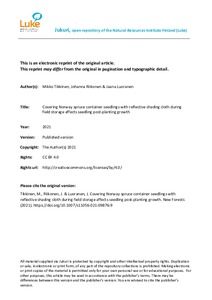 The field storage of container seedlings is often a necessity after the seedlings have been
transported from nurseries close to the regeneration area. Suboptimal storage conditions
can lead to reduced growth or even seedling mortality. Supporting favourable conditions
for the seedlings during storage requires labour, especially for the watering of seedlings,
and therefore increases the costs of forest regeneration. In this study, we examined the
effects of covering Norway spruce container seedlings with a reflective shading cloth and
neglecting the watering during field storage. This was done by measuring the drying of
the seedlings during field storage, the rooting of the seedlings when planting, and the subsequent
survival and performance in the field two and three growing seasons after planting.
The study comprised one-year-old Norway spruce container seedlings covered with
reflective shading cloth and seedlings with no cover (subject to rainfall) in 2012 and 2013;
additionally, in 2013, replicates from both treatments were stored in conditions where rainfall
was impeded. The stem water potential was measured, a rooting test was carried out,
and the seedlings were planted in the test field weekly over 42 days of field storage without
watering. As a novel finding, the results indicate that covering the seedlings with a
reflective shading cloth during the field storage increased the risk of grey mould in summer
storage and led to negative effects regarding post planting seedling development. The
application of a shading cloth directly on the seedlings cannot be recommended to prolong
the watering intervals during field storage in the current climatic conditions in Southern
Finland, where the risk of grey mould is high.