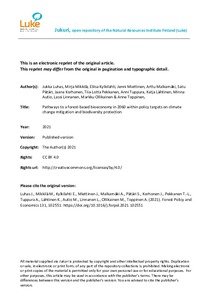 While climate change and biodiversity loss have exposed humanity to major systemic risks, policymakers in more than 40 countries have proposed the transition from a fossil-based to a bio-based economy as a solution to curb the risks. In the boreal region, forests have a prominent role in contributing to bioeconomy development; however, forest-based bioeconomy transition pathways towards sustainability and the required actions have not yet been identified. Participatory backcasting was employed in this study to ‘negotiate’ such pathways among Finnish stakeholders by 2060 in three forest-based value networks: forest biorefineries, fibre-based packaging and wooden multistorey construction. There are many alternative pathways, ranging from incremental to more radical, to a forest-based bioeconomy within a framework of ambitious climate and biodiversity targets. Path dependence can support incremental development on bioeconomy transition pathways, and this should be considered when planning transition towards sustainability. Orchestration of the more radical changes requires actions from legislators, raw material producers, consumers and researchers, because the possibilities for business development vary between different companies and value networks. The envisioned actions between the pathways in and across the networks, such as forest diversification and diverse wood utilisation, can offer co-benefits in climate change mitigation and biodiversity protection.