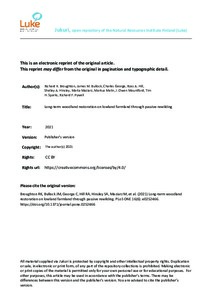 Natural succession of vegetation on abandoned farmland provides opportunities for passive rewilding to re-establish native woodlands, but in Western Europe the patterns and outcomes of vegetation colonisation are poorly known. We combine time series of field surveys and remote sensing (lidar and photogrammetry) to study woodland development on two farmland fields in England over 24 and 59 years respectively: the New Wilderness (2.1 ha) abandoned in 1996, and the Old Wilderness (3.9 ha) abandoned in 1961, both adjacent to ancient woodland. Woody vegetation colonisation of the New Wilderness was rapid, with 86% vegetation cover averaging 2.9 m tall after 23 years post-abandonment. The Old Wilderness had 100% woody cover averaging 13.1 m tall after 53 years, with an overstorey tree-canopy (≥ 8 m tall) covering 91%. By this stage, the structural characteristics of the Old Wilderness were approaching those of neighbouring ancient woodlands. The woody species composition of both Wildernesses differed from ancient woodland, being dominated by animal-dispersed pedunculate oak Quercus robur and berry-bearing shrubs. Tree colonisation was spatially clustered, with wind-dispersed common ash Fraxinus excelsior mostly occurring near seed sources in adjacent woodland and hedgerows, and clusters of oaks probably resulting from acorn hoarding by birds and rodents. After 24 years the density of live trees in the New Wilderness was 132/ha (57% oak), with 390/ha (52% oak) in the Old Wilderness after 59 years; deadwood accounted for 8% of tree stems in the former and 14% in the latter. Passive rewilding of these ‘Wilderness’ sites shows that closed-canopy woodland readily re-established on abandoned farmland close to existing woodland, it was resilient to the presence of herbivores and variable weather, and approached the height structure of older woods within approximately 50 years. This study provides valuable long-term reference data in temperate Europe, helping to inform predictions of the potential outcomes of widespread abandonment of agricultural land in this region.