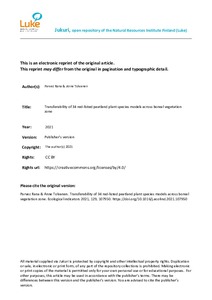 Red-listed species are negatively affected by habitat degradation and fragmentation. They usually have small populations and may be affected by local extinctions which makes species distribution modeling (SDM) challenging. Although SDM has been used extensively for biodiversity protection and regional land-use planning, the transferability of SDM between regions is still at the developmental level. We show a first attempt to demonstrate model transferability for red-listed plant species over boreal regions. We modeled the distribution of 34 red-listed boreal peatland plant species at national and regional levels, using multiple streams of environmental data in Finland. The objectives were: (1) to evaluate how environmental characteristics explaining species distribution differ between three regions covering five vegetation zones (subarctic, northern, middle, southern boreal, and hemi-boreal vegetation zones); (2) to assess the performance of one national and three regional species distribution models (SDM: northern, middle, and southern regions); and (3) to test whether the regional models can be transferred to other regions and discuss alternative methods to improve transferability. The maximum entropy (maxent) algorithm was employed to predict suitable habitats for the assessed species. An SDM performance was measured with the area under the receiver operative characteristics (AUC), true skill statistics (TSS), and the continuous Boyce index (CBI). Three conclusions are relevant. First, the environmental variables explaining species distribution differed significantly (p < 0.05) between the three regions. Second, the internal measure of accuracy measured as cross-validation of AUC, TSS, and the CBI was quite similar in both the national and regional models, which indicates that realistic species distribution maps could be generated from all models. Last, the external measure of accuracy (i.e. transferability) in the regional models was lower than the internal measure of accuracy, which indicates that a good regional model could not automatically ensure good performance when transferred to another region. To improve the transferability of the regional models, we suggest the normalizing of environmental variable values. The data-driven evaluation of red-listed plant species provides an approach that can be used in biodiversity and nature conservation.