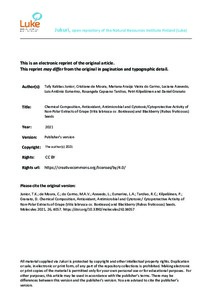 The aim of this study was to compare the influence of the extraction method, chemical composition, antimicrobial effects, antioxidant activity, and cytotoxicity on human cells of the non-polar extracts of grape (Vitis labrusca) and blackberry (Rubus fruticosus) seeds. The Soxhlet (Sox), Bligh–Dyer (BD), and ultrasound (US) methods were used for extractions. For blackberry non-polar seed extract, extraction via the BD method showed the highest mean values of total phenolic content (TPC), expressed in milligrams of gallic acid equivalent per 100 mL of non-polar seed extracts (102.37 mg GAE/100 mL), and higher antioxidant activity in relation to the 2,2-diphenyl-1-picrylhydrazyl (DPPH) radical, expressed in milligrams of gallic acid equivalent per 100 mL of non-polar seed extracts (11.50 mg AAE/100 mL), if compared with the Sox and US extractions. Similar results were obtained for the non-polar grape seed extracts, where BD extraction obtained the highest values for TPC (28.61 mg GAE/100 mL) and DPPH (35.36 mg AAE/100 mL). The type of extraction method had an impact on the composition of fatty acids. Only the non-polar blackberry and grape seed extracts obtained via the Sox method showed some in vitro inhibitory effect against Escherichia coli (IAL 2064) and Staphylococcus aureus (ATCC 13565). Regardless of the extraction method used, the non-polar blackberry and grape seed extracts did not decrease the cell viability (IC50 >1000 µg/mL) of cancer and normal cell lines, thus indicating the relative safety of the extracts. All the seed extracts decreased the generation of reactive oxygen species in the cell lines. Blackberry and grape seed lipid fractions can be utilized as antioxidants, and the extraction methods used cause significant changes in relation to their bioactivity and chemical composition.