Inadvertent shooting of brown bear cubs in Finland: what can managers do to reduce it? 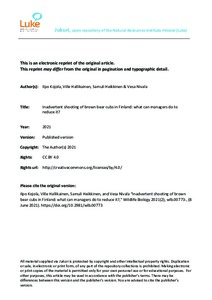 Family groups with cubs-of-the-year (cubs) in Finland's brown bear Ursus arctos population are protected from hunting, but sport hunters inadvertently shoot some cubs almost every year. In our data, 39 of 1463 bears from hunting bags (and 39 of all 1503 shot bears) during 1996–2018 were cubs. Mortality of cubs owing to inadvertent shooting by hunters was estimated to be relatively low (ca 8%) and was therefore above all an ethical problem. Male bias from the 1:1 sex ratio was significant (67%, χ2 = 4.333, p = 0.037) and possibly attributed to a greater resemblance with yearlings (legal game) given their larger body size. The year trend in the proportion of cubs in hunting bag was not significant (t = -1.832, p = 0.076) We examined whether the risk of cub to being killed by hunters was related to the distance from the Russian border because bear hunting has been practised for more years in eastern Finland compared with mid- and western Finland. The risk of cub being killed was not related to the distance but the risk of female cubs being killed was highest within a narrow zone at the Russian border. If the family group escapes to the Russian side, the risk of losing the hunting dog is presumably high. Given hunters' high motivation to keep their valuable bear-hunting dogs, the proportion of female cubs might be highest near the border. Systematic educational programs for hunters would likely reduce the risk of inadvertent killing of cubs. The full legal protection of all family groups is potentially the most efficient method to reduce the risk and thereby formally provide improved ethics in bear hunting. However, this practice might also prolong the mother–offspring bond.