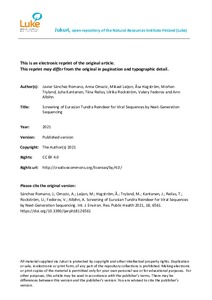 Reindeer husbandry is essential for the livelihood and culture of indigenous people in the Arctic. Parts of the herding areas are also used as pastures for farm animals, facilitating potential transmission of viruses between species. Following the Covid-19 pandemic, viruses circulating in the wild are receiving increased attention, since they might pose a potential threat to human health. Climate change will influence the prevalence of infectious diseases of both humans and animals. The aim of this study was to detect known and previously unknown viruses in Eurasian tundra reindeer. In total, 623 nasal and 477 rectal swab samples were collected from reindeer herds in Fennoscandia, Iceland, and Eastern Russia during 2016–2019. Next-generation sequencing analysis and BLAST-homology searches indicated the presence of viruses of domesticated and wild animals, such as bovine viral diarrhea virus, bovine papillomavirus, alcephaline herpesvirus 1 and 2, deer mastadenovirus B, bovine rotavirus, and roe deer picobirnavirus. Several viral species previously found in reindeer and some novel species were detected, although the clinical relevance of these viruses in reindeer is largely unknown. These results indicate that it should be possible to find emerging viruses of relevance for both human and animal health using reindeer as a sentinel species.